Hi, it’s Cricket here, and welcome to Cracking the Crag! This series is brought to you by–uh, nobody, we’re not fancy enough to have official sponsors. Nevertheless, I would like to give a special shoutout to Fred’s espresso maker. Nothing would be possible if it weren’t for that mighty machine.

I sat down with Ryan Sheldon, Oklahoma native, pebble-wrestler, and author of our newest guide, Refuge Bouldering. The conversation ran deep and past our allotted meeting time. We dived into the history of how this book came to be, about Oklahoma’s climbing scene, relatively obscure but vibrant, the juxtaposition of Refuge then, and Refuge now. 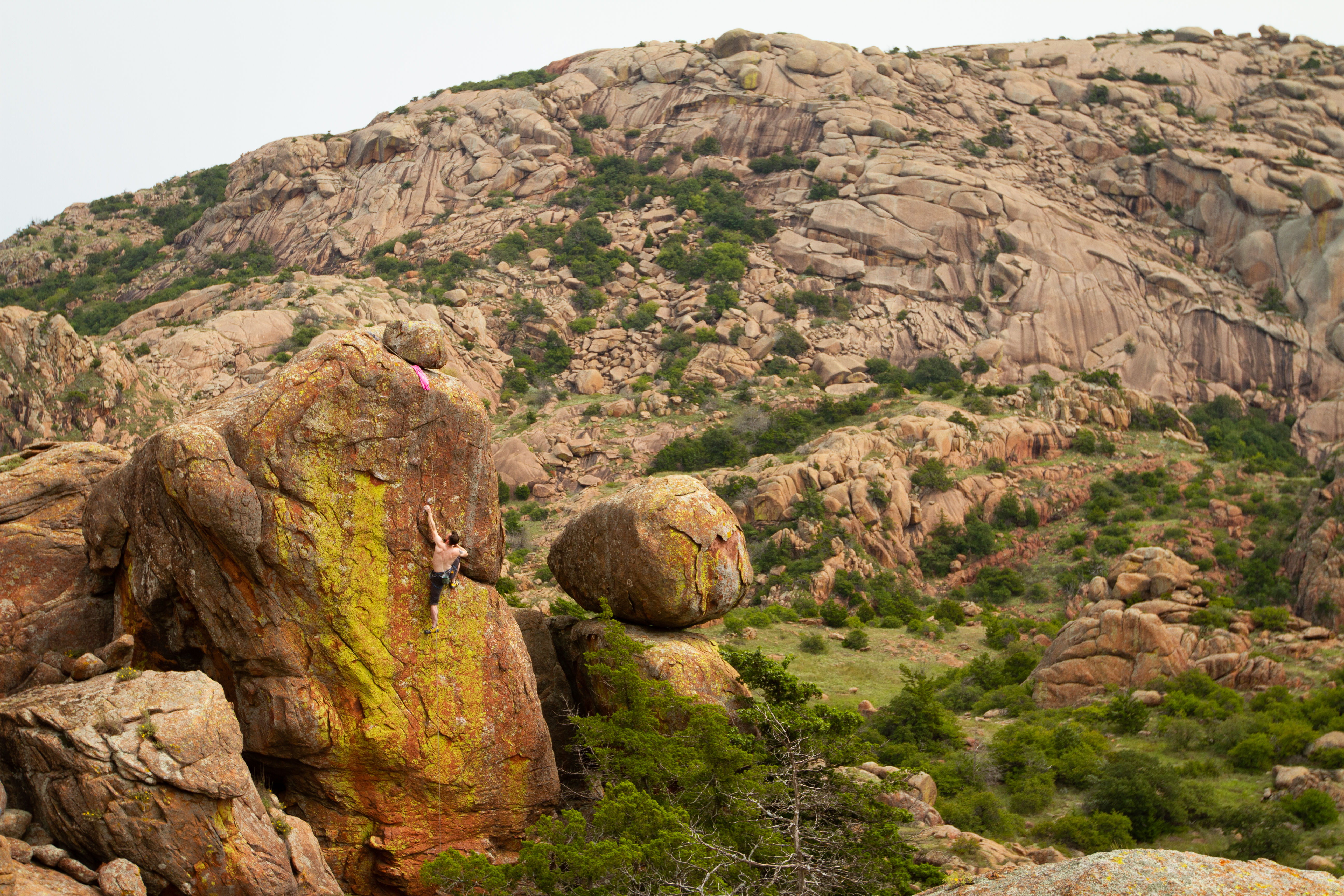 Ryan discovered the Refuge in 2012, a mere year into his climbing journey. At the time, the Refuge was so obscure, there were all but four known boulders to climb. When I asked how the Refuge has evolved in the nine years that have passed, he shrugged, and said, "not much, I suppose it feels smaller now."

Ryan climbed and trained in a repurposed grain silo. It wasn’t new, or shiny, it didn’t have the trendiest training equipment, but Ryan fell in love with it. “It was a climber’s gym,” he said. Ryan kept touching his beard and looking up into the top right corner of our Zoom screen. It made me wonder what fond, happy, or even embarrassing moments he was reminiscing about the early days. It made me think of my own. The repurposed grain silo changed hands, and names, many times over the years. OKC Rock’s, RockTown, Summit OKC… the gym was a hybrid, a bridge that connected the generations of Oklahoma’s sparse climbing community. But to people like Ryan, the core of it stayed exactly as it was. You’d still see the old-timers, wandering around with the decade-old chalk bag they refuse to get rid of, just as you see the birthday parties for young children taking place. Kids as young as three of four being belayed up the walls by teenage gym employees, and it made you wonder—will they grow up to be a climber? 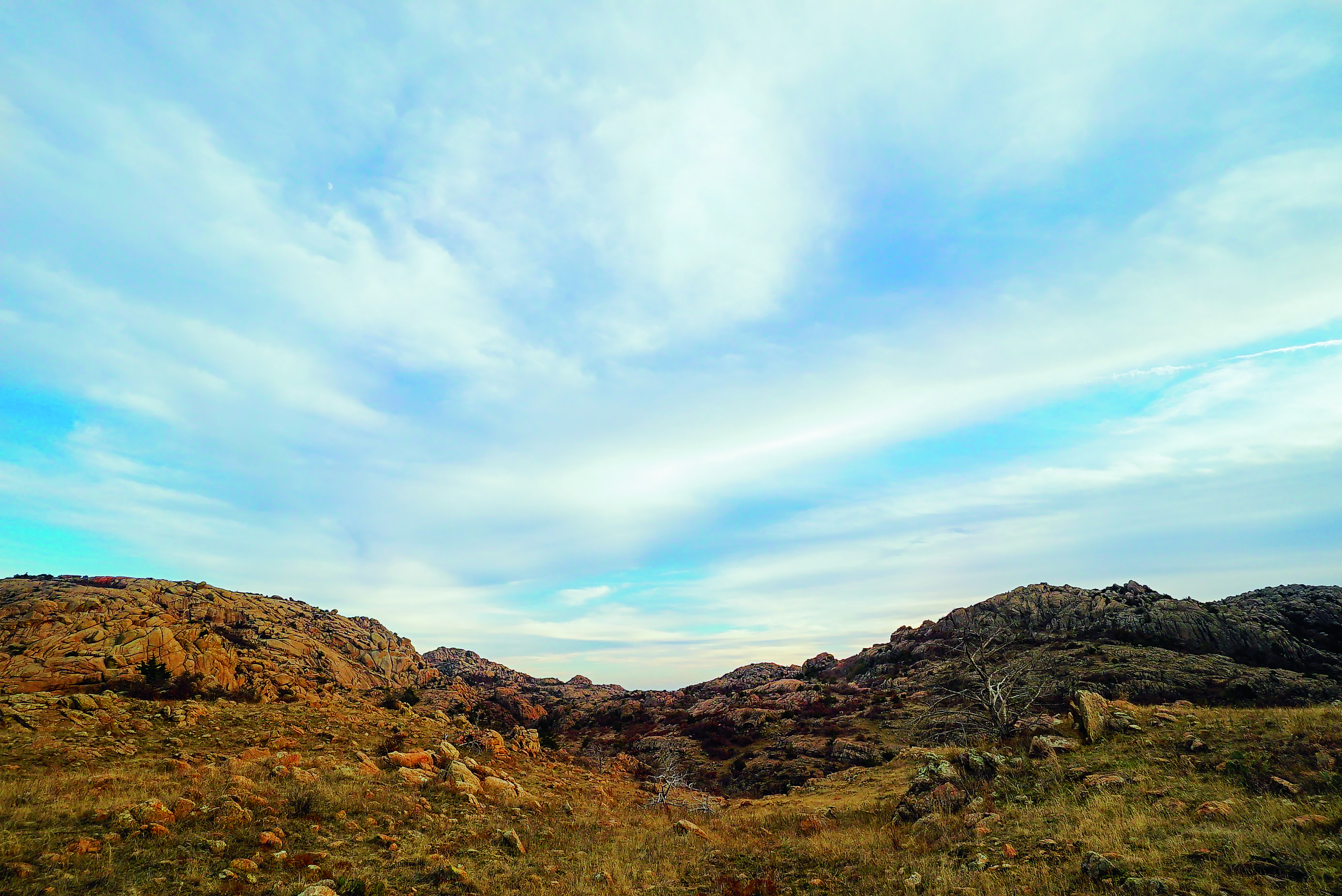 One of Ryan’s earliest climbing partner was a man named Mark Hagge, who was often found doing a little dance, or whistling a catchy tune, while bouldering. Mark moved to Oklahoma City from elsewhere, which, to Ryan, was a mystical land where one would learn outdoor climbing skills. In reality, Mark moved from Wisconsin. In the early 2010s, the majority of Oklahoma’s climbing was confined to a handful of traditional routes. Ryan had taken the “Learn to Lead” class at the gym, but without a mentor, traditional climbing is not the easiest to self-teach. If you’re a new climber, or if you remember your early days of the sport, you might remember how terrifying it was to begin. Climbing media has a history of misrepresenting what climbing actually is, both then and now. It was an abstract construct to Ryan, something for the ultra-athletic, for those with a long background of climbing in their families, the adrenaline junkies. Despite the limited exposure Ryan had to outdoor climbing, he was unconvinced flatness was all Oklahoma had to offer.

A gym employee name Morgan understood the wild, lost look in Ryan’s eyes, and suggested the Steak Dinner Boulder. Outside of a few known boulders scattered on internet forums, there was not much else established.

It was trial by fire. It was playing a video game without the instructions. “It was a nineteen-year-old leaving home for the first time, figuring out how washing machines worked.” However lightly he treads, there was always something to step on; spiders, deer, and elk feces. Ryan was hopelessly lost on the first day. On the second, he wandered around for five hours in the muggy heat, then spent another three hours falling off the classic Pride of the Jungle.

“Fiasco,” was how Ryan described it. It was a turning point for him, he didn’t need to say it, I wrote it down in my notes.

Nine years passed, and like an Albatross who knows hundreds of nautical miles of ocean, an internal map of the Refuge formed in Ryan’s mind. Ryan’s route development started as fumbles in the darkness. He looked on Google Maps for anything that looked vaguely climbable, and go for a long hike. A few trips in, he stopped bringing crash pads on the initial scouting run because more often than not, the scouting runs left him empty-handed. “Rock at the Refuge can look really barren,” he said, “when there are holds, they’re pretty small. Sometimes I’d spend over an hour marking the boulder only to find out—it wouldn’t go.”

Boulders were too tall, too sharp, too chossy, too blank. Of course, over the years, some of these boulders that were too tall and too blank turned from, “no way I could climb that” to “maybe” to gleeful whoops of joy from atop the boulder. These ascents, whether first, or second, or hundredths, were always done in the company of friends.

Mark had no interest in the Refuge because of how hard sharp granite is. What he offered was psych, an always upbeat attitude, and a style of smooth climbing, statically, flowing through half-pad crimps, that Ryan took with him.

On a slow afternoon, Ryan met Evan Smalls, the owner of Bloc Works. Nowadays, Evan always looks tired. There is a newborn screaming through the night. The stoke, however, never left Evan's eyes. The man’s got big ole shoulders, and is the kind of guy who makes pinches look smaller with his large hands. He says he can’t crimp, but Ryan knows that’s a lie. To Ryan, Evan was as much a friend as he is a mentor. Together, they set boulder problems, play technique and beta memorization games, and, as Ryan puts it, "quasi train." Training sessions, where laughter is more important than the training itself.

Evan went along on Ryan’s first trip to the Gilligan Boulder in 2014. “It makes you feel like an ant staring at a #8 Camalot,” said Ryan who, at the time, didn’t know what a camalot is. When I showed my dismay, he shrugged, and replied, “what does a boulderer need a cam for?”

The Gilligan Boulder was 30ft tall at its highest point. He left the boulder that day without ever having dipped his hand into his chalk bucket. Ryan wasn’t about to put his mom through the turmoil of picking him up from the emergency room.

Six years later, in the spring of 2020, he came back with a rope. Enough time had passed that he couldn’t recall the fear, and trepidation from his first day there. After sussing out each move on a rope, he went back out there with six crash pads and sent Quarantine Daze on the first go of the day. He hiked out, feeling a little confused, but a whole lot of hope—how could something that looked impossible feel so casual? Four months before that, he ticked off his first double-digit boulder and suspected he would ride that high for a lifetime.

“How has the Refuge evolved over the years?”

“It’s more traveled now,” Ryan replied. “The Refuge used to feel a lot bigger. More or less, it’s the same. Maybe it lost a little bit of its mysteriousness. Now, it feels like home.”

“If you could give a Refuge newcomer one piece of advice, what would it be?” 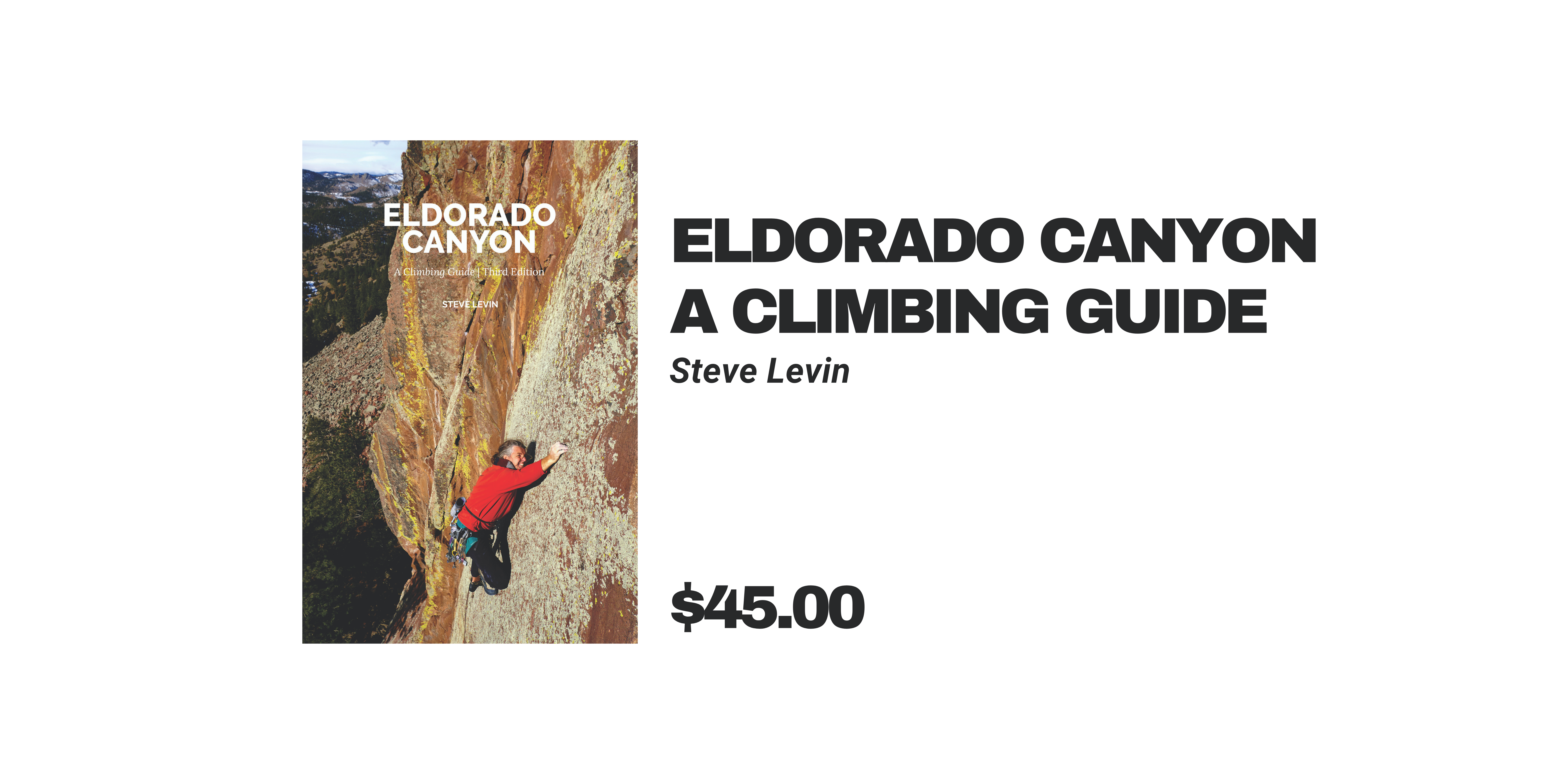